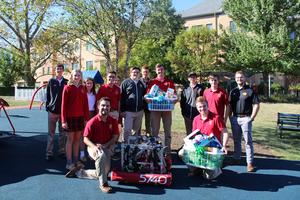 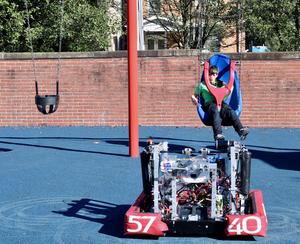 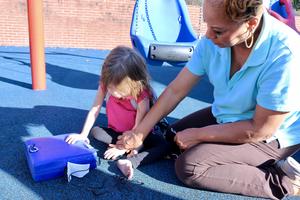 CRANBERRY TWP, PA – September 26, 2019, Last week, North Catholic High School Robotics’ Team 5740, the Trojanators, gifted adapted toys to Child’s Way®, a program at the Children’s Home of Pittsburgh & Lemieux Family Center. Team 5740 adapted toys with special buttons, lights, and vibrations as their summer project for the kids in Child’s Way®.  Child’s Way® is a daycare within The Children’s Home & Lemieux Family Center that serves up to the age of 21 with educators and nursing staff. Team 5740 also demonstrated their team-built robots’ capabilities on the playground after distributing the newly adapted toys.

“Adapting and distributing the toys for the children at Child’s Way was an awesome project for our students.  They were able to use their technical skills to serve a really special group of kids,” said David Yackuboskey, STEMM Coordinator, Teacher and Lead Mentor for North Catholic High School’s FRC Team 5740. “Our students also got to witness the unique abilities of the children at Child’s Way®, as many of the kids drove our robot and tried out their newly adapted toys. We are excited to come back with another round of adapted toys!”

“We were so thankful that the North Catholic High School Robotics Team came out to visit The Children’s Home,” said Pamela Keen, CEO of the Children’ Home & Lemieux Family Center. “The kids had a blast watching the robot demonstration! It was nice that the kids could take turns controlling its movements. The team from North Catholic also engineered adaptive toys for the children at Child’s Way®, and they demonstrated how each one could be used by young children of any ability. Everyone had a great time!”

The mission of the robotics program at North Catholic High School is building students of creativity, leadership, and professionalism – connecting them to a future enlightened by their STEMM experiences. This is accomplished by investing students in FIRST Robotics, a holistic program in which teams of students design, build and compete with their robots. It is also about sharpening character traits such as gracious professionalism, networking with peers and industry professionals from around the globe, as well as problem solving in a project-based learning environment. North Catholic High School is located in Cranberry Township, Pennsylvania, and is celebrating 80 years of excellence.

To learn more information about the Trojanators, visit: